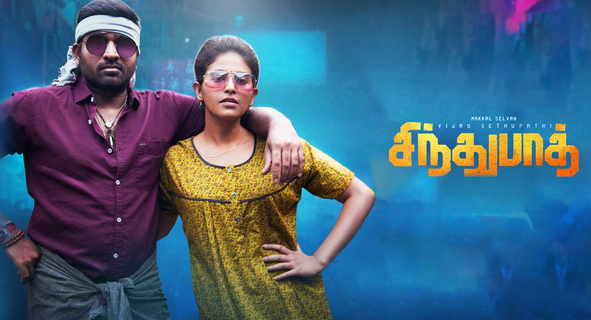 Thiru ( vijay sethupathi) and his sidekick Super(surya vijaysethupathi) are petty thieves in the town of Thenkasi. They live without any ambitions and just live for the moment. Things turn around when Venba( Anjali) comes to town from Malaysia where she works in a rubber plantation. Thiru falls instantly in love with Venba and eventually she too gets drawn to Thiru. Both decide to get married against the wishes of Venba’s family. Venba makes one last trip to Malaysia to inform her employer and to settle her payments. That’s when trouble stars for the couple, as Venba reaches Malaysia she is taken by a skin trade gang and is transported to Cambodia. How Thiru saves her is the rest of the story.

Director Arun Kumar’s previous two films Panniyarum Padminiyum and Sethupathi IPS with Vijay Sethupathi were both impressive though both where two extremes comparing their genre. In This film Sindhubaadh both have tried something out of their comfort zones. Vijay sethupathi  and Anjali’s performance in the first is the only saving grace in the film, rest is crap. As the first half breezes thru, second half ends up torturing the audience till the end with nonsense . The director tries to over complicate things by adding more information, characters and unwanted action and makes a mess of it. SIndhubaadh can be avoided. I give it 3/10

Posted by venkiblogger on June 29, 2019 in Movie Review

Film starts with a gruesome murder of a young lady who has been stalked by a serial killer. These murder continue targeting young women who are alone in the house, and the police are clueless and are left baffled . We then follow Swapna ( Taapsee ) a game developer who works from home. She has a unique phobia called nyctophobia – fear of darkness which she suffers after an incident in her past. She even has her house guarded with surveillance cameras to protect her, while her only companion inside the house is her maid kalaamma ( Vinodhini).Only in the intermission we come to know that the serial killer has targeted Swapna for his next victim who is left desperate within her house. What happens next is the rest of the story.

For director Ashwin this his is second film after a successful debut with Maya. Game over too doesn’t disappoint the audience. The story telling is clean and has enough bread crumbs that the audience can reach out and follow the narration without any confusion. Taapsee single handedly carries the whole film on her shoulders and does a brilliant job. Well supported by the Vasanth the cinematographer who creates the world around the lead role, and the brilliant background score by Ron Ethan Yohan elevates this thriller to its success. The only drawback in the film for me is the director takes his own time on characterising the main lead , for which he could have used that time to explain more on the twist in the film. Other than that film is a must watch and I give the film 7/10.

Posted by venkiblogger on June 16, 2019 in Movie Review

Posted by venkiblogger on June 13, 2019 in Trailers

Kumaran (Surya) is an environmental engineering graduate who comes back to his village roots to bring a change for his village and not get caught in the corporate world. This motivates the village youngsters who join Kumaran and run an organic farm. This elevates Kumaran by status which brings him under the radar of local politician who enjoys profits made by loaners and fertilizer vendors. Soon Kumaran gets into trouble as his farm his burnt and his compatriots muscled out, he is left all alone.  He finally understands that even to be a do-gooder he has to be politics and joins the local party. But being inside the party is not as simple as he has to sacrifice his basic integrity and honor. How Kumaran climbs up the ladder and achieves his goal is the rest of the story.

Though the story starts simple and clearly shows what it leads to, unnecessary scenes and abrupt jumps makes it unbearable to the audience. Director Selvaraghavan produces a half boiled script which makes it hard to digest, Sai Pallavi’s half the time dead as a zombie or overacting to the level were the whole scene is spoilt. Rakul preet singh manages to deliver a decent performance but her role ends abruptly. The film barely survives with just Surya’s acting and performance but that too doesn’t help the film Music by Yuvan is Ok but songs are a disaster. I give it 3/10

Posted by venkiblogger on June 3, 2019 in Movie Review

Devi 2 storyline starts from its predecessor, where Krishna (Prabhu deva) finally gets rid of Ruby the ghost from his wife Devi’s (Tamannaah)  body , he is still insecure of unearthly spirits. So as suggested by his family astrologer, he shifts geographically to avoid any unearthly conflicts. The couple migrates to Mauritius and start a peaceful life. But trouble follows them as this time Krishna is possessed by not one but two ghosts who needs Krishna’s body to fulfill their last wishes. How Devi manages the two ghosts in Krishna’s body and finally gets rid of them is the rest of the story.

The big question is why there has to be sequel to an already mediocre run movie. Devi did not have huge box office hit and failed in both languages. At least a songs were better and it had a better production value. Devi 2 was pure waste of money which below average script and miserable acting of the whole cast. R J Balaji tries to salvage the second half but the damage has already been done. Devi 2 gets a miserable 1/10

Posted by venkiblogger on June 3, 2019 in Movie Review