Posted by venkiblogger on December 31, 2015 in Movie Review

Posted by venkiblogger on December 31, 2015 in Movie Review

Posted by venkiblogger on December 31, 2015 in videos

Posted by venkiblogger on December 29, 2015 in Movie Review

Naina (Vaishnavi) and Kavin (Nishesh) are very high spirited kids , due to their extreme activeness they tend to be naughty and troublesome at school. This causes their parents to change their kids school frequently. The schools too brand these as kids with ADHD (Attention Deficit Hyperactivity Disorder) and ask their respective parents to send them to a special school . Finally fed up with their unruly behaviour the parents send them to a special boarding school . Even there the kids behaviour does not change and the parents are left clueless . In comes Dr. Tamil Nadan (Surya) a child Psychiatrist and his wife Venba (Amala Paul), a school teacher who believes in a different perspective on the education system . While unlocking these kids special potential they also teach the parents a valuable lesson on parenting .

Yet again Director Pandiraj proves that he is a master in handling child artists and giving us a clean film for all audiences . This film targets not only the education system but also the parents who blindly follow it. He tells how parents can influence kids right from pregnancy and how to guide them towards positive nature rather than a competitive one . Good performances from the lead child artists Vaishnavi and Nishesh . Surya and Amala Paul perform well to their characters, but the rest of the cast is like watching a TV Ad . Not everyone convinces us of day to day characters. The only plus was the dialogue which was sharp and keeps the film to the point , But very subtle screenplay makes the film incomplete towards the end . Pasanga 2 a must watch for young parents . I give it 5/10

Posted by venkiblogger on December 27, 2015 in Movie Review

Posted by venkiblogger on December 23, 2015 in Trailers 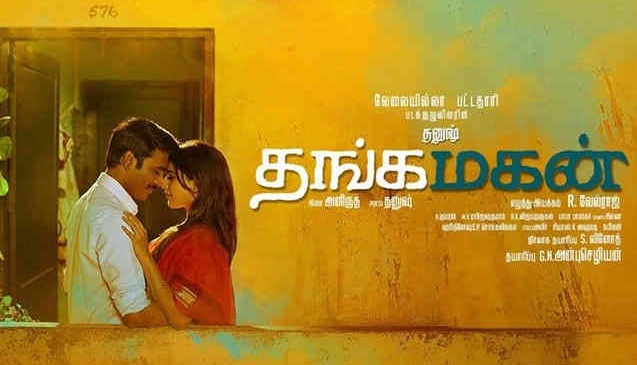 Thanga Magan tells us the life of Tamizh ( Dhanush ), we follow his happy teenage days, his love , his breakup, his marriage ,his happiness and his sorrows. He falls in love with Hema (Amy Jackson)a girl way out of his league , but he charms his way through and finally makes her fall in love with him . But their love doesn’t last long and breaks up in a small misunderstanding.He is left distraught, life goes on and he joins his father (KS Ravikumar) to work in the same office. He gets married to Yamuna (Samantha) and starts to lead a normal life. His peaceful life is turned upside down when his father faces corruption charges and his father takes a drastic decision . How he manages to clear his father name makes the rest of the story.

Thangamagan is a clean and a full family entertainer , Director Velraj proves that you don’t need too many mass moments or exaggerated fights or colorful locations attached if your story and screenplay is matched to near perfection. His feel good romance and few but well crafted mass moments makes this a clean hit at the end of the calendar year. Dhanush just lives thru the character and carries the film on his shoulders throughout. Both lead actresses have a decent role to perform and play their part equally well , although Amy Jackson’s lip sync was of 60 % off, but her acting was better than her previous venture. Samatha is challenged with a different role as a middle class wife, but does it well enough to be her best performance till date. Satish who plays Dhanush’s inseparable friend provides the comic relief which balances the film well. Radhika and KS Ravikumar perform well and where tailor made for their roles . Music is big plus in the film and songs where directed and placed in appropriate places which helps the film move. The only draw backs was the second half was not as strong as the first , it seemed too easy for the hero at the end of it . That said Thangamagan is still worth your money , I give it 6/10

Posted by venkiblogger on December 19, 2015 in Movie Review