Gandhi (Vijay Sethupathy) is a young man living in a village near Madurai. His misfortunes in business leave him with lot of debt. To get out his debts he decides to go to Abroad to find a job and make money. He leaves with his close friend Paandi ( Yogi Babu) to Chennai to get a passport and apply his visa. Both of them get linked to a travel agent through his friend who falsifies his documents as a married man to get a London visa. Gandhi’s misfortunes follow him when he fails to get the visa and is stuck with falsified passport as a married man. He gets into more trouble to when he tries to clear his marital status, how he gets out of this is the rest of the story.

Manikandan gives us yet another story of desperation , but on the lighter note. The film is not just hilarious but also gives a slap in the face on the corrupt system and how the lower middle suffers from it day to day. Vijay Sethupathy along with a great cast delivers a wonderful performance throughout. Yogi babu’s performance is a notable one and you tend to miss him in the second half. Ritika singh’s lip sync was a problem but her acting shields that. Screen play is well balanced with lot of scenarios which the audience could relate to. With a flawless first half and a slow but steady second half Aandavan Kattalai gets 6/10

Posted by venkiblogger on September 25, 2016 in Movie Review 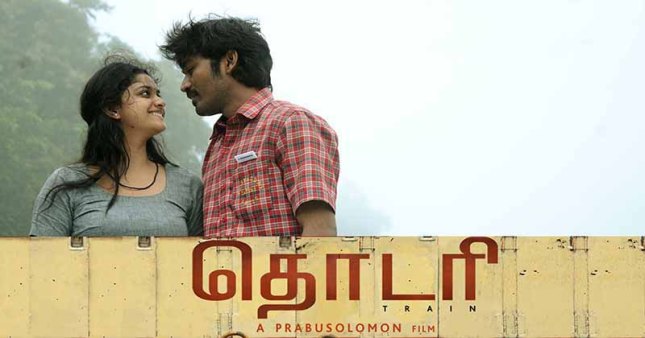 Poochiyappan ( Dhanush) is a pantry vendor in a train bound to chennai. Born an orphan his only aim in life is to marry a caring women and lead a simple life. When he meets Saroja( Keethi Suresh) a touch up girl accompanying a film star in the train, he decides she is one for her. In a turn of events and human errors, the train runs out of control, he is chased by a psychotic army commando and its all upto Poochiyappan to save the day and 750 people Inside the train. How it ends ? Watch Thodari.

Prabhu Solomon always has the knack to mesmerise audience with beautiful scenery and natural narration, so when he teams up with Dhanush , expectation is very high. Thodari starts very sluggishly with disconnected scenes and slow narration. But it makes a strong impact at the end of the first half. Dhanush carries the whole film on his shoulders but with a weak screenplay ,his burden becomes heavy. Keerthi Suresh does a decent job. The story is spoilt with lot of sub plots and wayward narration. Songs doesn’t impress and are placed in awkward places which irritates the audience. Vfx is a mess and makes lot of scenes weak. With a lot of things in the plate , but few which stands out , Thodari gets only 4/10

Posted by venkiblogger on September 24, 2016 in Movie Review

Posted by venkiblogger on September 21, 2016 in Trailers

Movie starts with a blank screen , with voice of men and women in a party atmosphere . Suddenly we see three women running hurriedly and catching a call taxi back home in the middle of the night. At the same time three men , one severely hurt and bleeding his taken to a hospital by his two friends. The girls Meenal ( Taapsee) , Fahlak( Kirthi Kulhari) and Andrea ( Andrea Tariang) are flat mates and independent working women. They are pretty shaken up by the incident and are in mixed emotions . The men are very angry and want them to suffer for the injury caused and begin to torment them. Even their complaints to the police are rejected since the injured one has a political background. Things get worse when Meenal is arrested on attempt to murder and world is turned upside down for the three girls.How they recover from the this is the rest of the story.
Pink shows how a girl is branded easily in the society by just based on looks and circumstances in which they are seen in. How the lives of three independent women are twisted easily by the ones who are corrupt and arrogant. A Brilliant performance by all three women especially Taapsee and Kirthi Kulhari. Amitabh Bachan as usual steals the show by his natural acting and subtle emotions. Background score and cinematography was well done. The screenplay was a balancing act but slipped thru. Editing could have been a little crisp and sharp . I give it 5/10

Posted by venkiblogger on September 18, 2016 in Movie Review

Posted by venkiblogger on September 12, 2016 in Trailers

Three desperate teens Rocky (Jane Levy), Alex (Dylan Minnette) and Money (Daniel Zovatto) are always in look out for easy money through small break – ins in the neighborhood. Since Alex’s father works for a Security firm, dis -arming the codes is simple and they walk out with the loot easily. When they hear about a blind army veteran Norman Nordstrom (Stephen Lang) who has 300,00K in cash stashed in his house, they don’t hesitate to break in. Things don’t go there way when they break in and thus begin the cat and mouse game between them.

Don’t Breathe is not just a home invasion thriller, it just takes you into a roller coaster ride into the thrill tunnel and just doesn’t come out. With twist and turns at every corner, you practically sit on the edge of your seat the whole time. Stephen Lang who commits to the character gives you chills throughout the film. With all the technical areas in top notch condition, you rarely have a chance to blink in the movie. A particular scene which stands out, where there is forced blackout with just silence as the teenagers are being hunted in the house. Even though predictable at times, it still manages to keep the audience intrigued. The only dropping point for me in story is the sadist back story which makes you cold. Don’t breathe makes you shudder till the end.  I give it 6/10

Posted by venkiblogger on September 12, 2016 in Movie Review

ALEXA IBC 2016 Showreel – Around the World

Posted by venkiblogger on September 12, 2016 in Technology, videos