Anantharaman (Yatin Karyekar) is an upright, honest government servant, who stands as an example of a perfect citizen among the society. His daughter Divya, who dreams of sharing her life with abold and fearless guy, but is quite choosy when it comes to her partner’s caste. In a comedy of errors she mistakes Saravanan (Santhanam) as a Brahmin and express her love to him. But when she finds out he is from another caste. Saravanan tries to convince her Dad, but Anatharaman who is orthodox, doesn’t approve of Saravanan and his family. Divya too breaks up with Saravanan as she cannot go against her father’s will. But challenges Saravanan to spot at least one bad quality in her dad and if he finds one, she is ready to sacrifice her family and marry him. One night when Saravanan and his friends drink too much they plot against Anathraman which turns everyone’s life upside down. What happens next is the rest of the story.

Director Johnson makes it clear that he not here to make something different, he sticks to a specific storyline and fills it with gags and makes it fun throughout. Santhanam too hasn’t tried to overdo anything, even the romance is kept to bare minimum he just concentrates on comedy and delivers it neatly. Santosh Narayan’s music is fine, the Gana songs were entertaining. The cast which involves MS Bhaskar, Thangadurai, Manohar, Maran, Kingsly, Sai Kumar and Motta Rajendran keeps us entertained till the end. I give the movie 4/10

Posted by venkiblogger on July 29, 2019 in Movie Review

Vasu and his wife Aathira( Akshara Hasan) recently moved to Malaysia , and Aathira who is pregnant is specially taken care by her doctor husband. Their lives are turned upside down when a criminal is admitted in vasu’s hospital, and Aathira is kidnapped and the kidnapper needs Vasu to gets the criminal out of the hospital in return of Aathira. How the couple lives are put to danger in this ordeal and will they come out alive is the rest of the story.

Apart from the stylish making,looks of Vikram and good choreographed actions sequences the film lacks the story which was needed to back up the amount of money spent on the film. Flawed screenplay didn’t help the film either. On the whole the film is a complete failure even for vikram’s fans. I give it 3/10

Posted by venkiblogger on July 21, 2019 in Movie Review 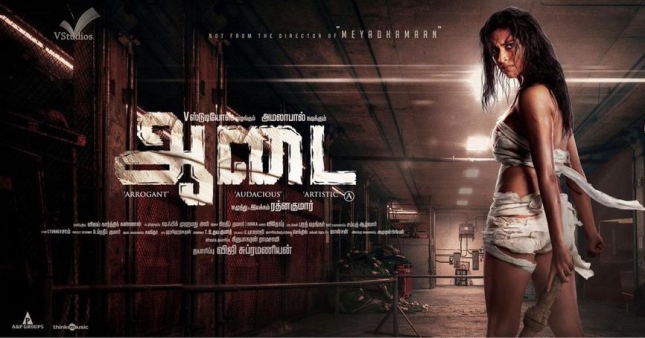 Film starts with a freedom movement in the early years of the 19th century in the the kingdom of Travancore. Where a tribal woman named Nangeli who claimed to having to cut off her breasts in an effort to protest the caste based tax system on breasts. Following the death of Nangeli and series of movements the tax was taken off. Cut to present day we follow Sudhanthira kodi alias Kamini (Amala Paul) a bold and daring TV show producer who hosts a reality prank show. Though Kamini is fearless, she is also very self-centred and doesn’t bother about the outcome of her actions. On her birthday night she and her friends get drunk and party in their vacant office space. All of them get high and start to hallucinate when one of her friends feeds them magic mushrooms. In the morning Kamini finds herself naked and left alone in the vacant building. How she gets out of this predicament is the rest of the story.

Rajesh selva who directed Mayadha Maan takes a huge step in this film , which talks about freedom and how it is misused by the current generation in the name of new age culture. What starts as a women centric movie,  makes a hard hitting points on various current situations and questions our morality.  Amala paul who took a bold move by taking the lead role carries the whole film on her shoulders, and fits perfectly into the character. She has made a mark on her career by doing this film. Cinematography is neat and BGM was ok. The problem was the duration of the whole film; it could have been 15 mins less and could have been without the songs. I give 6/10

Posted by venkiblogger on July 20, 2019 in Movie Review

Savitri alias Baby ( Lakshmi) is a 70 year old grandmother , who lives with his Son’s family and She runs a canteen along with her cousin Chanti ( Rajendra Prasad)  Baby is a tough woman and has gone through a tough life raising her son alone after her husband’s early demise. This has made Baby a nagging old woman who snaps at almost everyone, including her daughter in law who finally gets a heart attack after the stress she goes through at home. This creates tension at home and Baby finally decides to leave home. Leaving home as a last thing she goes to a carnival and see her grandson perform on stage, at the carnival she stumbles upon a holy man who gives a lucky charm of a Ganesha idol and asks her to make a wish which would transform her life. As a turn of events Baby takes a photograph of herself in a magical photo studio and gets transformed into a 25 year old girl. How Baby lives her new life is the rest of the story.

Though the foundation of the character is laid by the veteran actress Lakshmi, the whole film is carried by Samantha and her terrific performance. She has performed to her best and fitted the character to the best. Rajendra Prasad too has given a good performance. Other actors have also given the best. Though the film is based on a second chance in life, it speaks about the roots of our culture which our past generation have left which we have no time for. The first half is fast and crisp, but the second half proves to be lengthy and filled with repeated melodramatic scenes. This makes the overall time of the film lengthy and boring in the second half. Oh Baby doesn’t have too many  surprises in the script, but makes it an enjoyable one. I give it 6/10

Posted by venkiblogger on July 7, 2019 in Movie Review