Posted by venkiblogger on October 30, 2018 in Movie Review

Vada chennai begins in 1987 with an aftermath of a gruesome murder, where the killers Guna( Samuthirakani), Senthil( Kishore) , Velu (Pavan) and Pazhani(Deena) are planning how to take over the business now as they have killed their leader. Very soon they break their bond and they become as rival gangs waiting to get to each other throats when they have a chance . Cut to the year 2000 we are introduced to Anbu (Danush) a young carrom champ who lands up in prison over a minor scuffle with one of Guna’s men. As the prison is divide between Guna and Senthil’s gang, Anbu must win over Senthil’s goodwill to save himself. How Anbu’s life goes through ups and downs and how he finally understands what really is his destiny, is the rest of the story.
The narrative of Vetri Maaran goes back and forth between years adding details to each character and their motives and who they in the epic drama which is said to be written as 2parts. Vetri Maaran as a crafted story teller brings the audience under a spell with well written and executed film. It’s not just Dhanush who excels in his character, almost every actor gets in to the character and performs well . Every technical department from production design to cinematography do their part and bring this drama to success. Music by Santhosh Narayanan is top notch.The only flaw is that is at some point not all the audience can keep track of the back and forth switching between years of the story, it takes time sync in. Violence and unmuted foul language makes it unwatchable to the family audiences. Vada Chennai gets 7/10

Film starts with the village panchayat headed by Durai Ayya( Rajkiran) takes the decision to restart The village thiruvizha which was stopped due to a clash between two caste families which ended in with loss of lives. But Pecchi (Varalakshmi) who lost her husband in the brawl wants to take revenge during the thiruvizha . Durai Ayya takes responsibility to have a spotless event , but fate has other plans for the village and its people. Balu (Vishal) returning after 7 years to the village also stands beside is father to see this thru. What hurdles they come across and whether the village finally has its long awaited thiruvizha is the rest of the story.

Problem with Sandakozhi 2 is it fails to even come close to its first edition. It doesn’t even have any continuity to the prequel. So why did they have to brand it as part2. Rajkiran alone stands tall in the film without any flaw.Vishal has tried to improve on his acting and has lost the charm of an action hero, though the film has some action sequences , . Keerthy Suresh who’s comes as the bubbly love interest of Vishal manages to bring some laughs. Varalakshmi is annoying in her character and doesn’t impress at all. Second half tests the audience has it slowly rolls and finally ends to bring relief to the audience. I give the film 4/10

Arun Kumar (Vishnu Vishal) is aspiring film maker who is looking for a producer for his psychotic thriller storyline. But pressures from his family and his bad luck in the film industry he finally takes up cop job which he is entitled after his father’s death. Parallel to this there is psychopath killer who is murdering young school girls. Arun who has done tons of research on serial killers, immediately connects to these killings and eagerly expresses his thoughts to his senior officials. Though at first his theories are neglected, It becomes clear that Arun is the only one who is thinking like the killer. How Arun cracks this case and stops the killer is the rest of the story.
Director Ramkumar who gave mundassupatti comes back with a contrasting genre In Ratchasan. He gives us a complete thriller with a good support from all the technical departments, especially from the visuals and chilling music from Ghibran.Vishnu is strong in the character and does a good job. Amala Paul has very little scope, but manages to get a decent screen time. Story and screenplay was well driven and are key factors in the movie’s success .There was a certain lag which makes the movie a little bland in the second half, other than that film gives you the edge of the seat treatment. I give the film 7/10

Posted by venkiblogger on October 14, 2018 in Movie Review

Posted by venkiblogger on October 8, 2018 in Movie Review 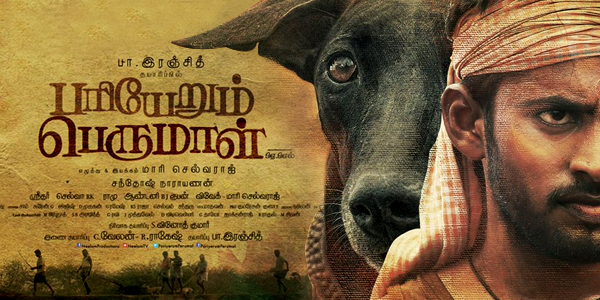 The film opens with the line ‘caste and religion are against humanity’ , what follows is a hard hitting anti-caste drama by the debutant Mari Selvaraj. Paariyerum perumal or Pariyan (Kathir) is from a village called Puliyankulam which majorly consists of lower caste which highly dominated by the higher one. This actually drives Pariyan to study hard and become a lawyer. In the law college he still faces discrimination among students and embarrassment because of poor English knowledge. He becomes friends with Jothi ( Anadhi) who helps him out with his English. Though Pariyan limits himself Jothi since she is from a higher caste, Jothi begins to fall in love with him. This creates a series of troubles for Pariyan , whether Pariyan survives this is the rest of the story.

Though the film is filled with caste based violence, the director subtly balances it with hope and confidence in the lead character with which he overcomes his position. He also shows a parallel story in which he shows about honor killings which are prevalent and made as a service to God.  Kathir gives his best in the film and shows he can handle good roles when presented. Anandhi delivers well, but her character remains a little out of syllabus, which creates a little loose end in the film. Rest of the cast is well handled by the director, including Yogi babu who comes as kathir’s friend who gives us a few laughs. Music and background score by Santosh Narayanan is flawless and completes the film. Pariyerum Perumal is a film not to be missed .I give the film 9/10

Posted by venkiblogger on October 8, 2018 in Movie Review

Film starts with the introduction of Varun( Vijay Deverakonda) celebrating his birthday with his friends . Fully drunk in the party he is suddenly escorted on his way back home , as his father the Chief minister is about to make huge political decision. Upon arriving he finds out his father who is being charged in an illegal asset case, nominates Varun his son as the next CM. For Varun who doesn’t gets involved in the state politics , is quickly dressed up in white & white and taken to the governor palace for the taking charge of the state. His father Vinothan( Nasser) makes sure that he is taken care off by the other party members , and assures Varun that this a temporary act and he just has to be in this position for two weeks . But this become complicated when his father gets convicted in the case and sent to prison. How Varun realises his actual responsibilities and take control of the state is the rest of the story.

Though the film starts on a familiar grounds as Bharat ennum naan, NOTA actually doesn’t waste time in establishing characters , but gets into the plot immediately and goes in a steady pace. Vijay Deverakonda is apt for the role and with very minor lip sync issues manages to pull of is first Tamil film with style. Sathyaraj and Nasser stand between Vijay as pillars and support the film through out. Though with predictable twists NOTA still manages impress with Vijay stealing the screen space totally. I give the film 6/10

Posted by venkiblogger on October 7, 2018 in Movie Review 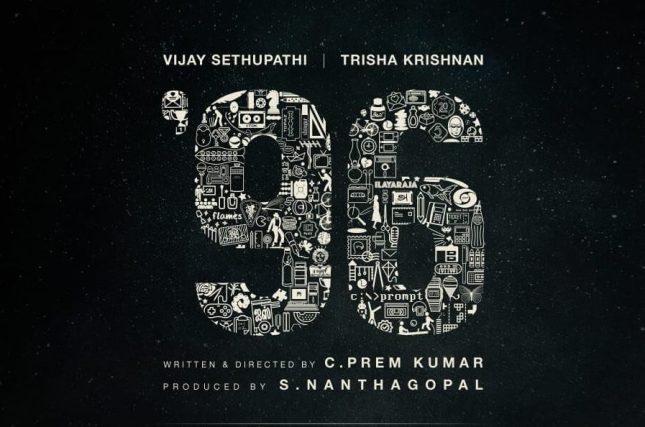 Ram( Vijay Sethupathy) a travel photographer lives alone , always on the go and living where the nature takes him. On one of his teaching projects he lands in his home town of thanjavur. He visits the school had studied which brings back old memories. This leads to connecting to old friends and finally leads to a reunion of the 96 school batch in Chennai. For Ram this is more than a reunion as he going to meet his one and only love Janaki Devi (Trisha). How they meet once again and how they spend those few hours reminiscing their past is the rest of the story .
With lot of love director Prem Kumar takes us to our school day memories and mesmerises with nostalgic music by illayaraja. With terrific Bgm and songs by Govind Menon the film takes us to a different space. I wonder how Vijay Sethupathy becomes the very character he adorns and transforms himself to create magic on screen. Trisha too delivers equally onscreen and she shares equal space with Vijay Sethupathy . Actors who play young Ram and Janu Aditya Bhaskar and Gauri Kishan are equally good and mostly dominate the first half. Other cast members perform well but have limited screen space.Second half is slightly slow but both the actor’s chemistry and acting leaves us speechless. I give the film 8/10.

Posted by venkiblogger on October 6, 2018 in Movie Review

Vijay Govind (Vijay Deverakonda) an eligible bachelor and a lecturer in an engineering college, is raised by his father with traditional culture values. He is in pursuit of a perfect match for him, which will complete his life. He comes across Geetha (Rashmika Mandanna) in a temple and falls for her instantly. While heading to his hometown for his sister’s engagement, coincidentally he meets Geetha on the same bus. AS he tries to make a move on her, he accidentally kisses her. Geetha misunderstands him to be a womanizer. Though she doesn’t shout and stop the bus, she calls her brother (Subbaraju) and asks him to arrive at the bus destination to take of Vijay. Vijay jumps of the running bus and reaches his hometown, just in time for the engagement . This is where it becomes interesting as he meets Geetha again as her brother turns out to be the fiancé of his sister. Geetha doesn’t expose Vijay at the engagement as it would stop the wedding.  Rest of the film follows Geetha and Vijay as they are bound to prepare for the marriage together. How Vijay proves himself as innocent and wins Geetha’s heart is the rest of the story.

After playing an egoistic personality in Arjun Reddy, Vijay plays an exact opposite role in this film. He charms his way out and carries the film single headedly. Rashmika though very rigid in the first half, does a good job in the second half. Rest of cast gives a good support and carry the film without hiccups. Director though follows a predictable path, still entertains with well-planned screenplay and make the film work. Gopi sundar’s tracks have managed to win the hearts of the audience, but the visuals in the songs could have been better. I give the film 6/10

Posted by venkiblogger on October 4, 2018 in Movie Review